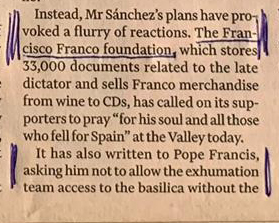 Instead, Mr Sanchez's plans hace provoked a flurry of reactions. The Francisco Franco foundation, which stores 33,000 documents related to the late dictator and sells Franco merchandise from wine to Cds, has called on its supporters to pray "for his soul and all those who fell for Spain" at the Valley today.

It has also written to Pope Francis, asking him not to allow the exhumation team access to the basilica without the consent of the Franco family and the Benedictine monks who run the complex.

Mr. Sánchez's stance has also been attacked by the anti-inmigration Vox party, which won 10 per cent in Spains's elections in April, breaking the mould in a country that has been suspicious of the far-right since Franco's death.

Juan Chicharro, president of the Franco foundation and a retired general in the Spanish marines, said that Vox was a "hope, a light, for many Spanish people".

He depicts the far-right parte as a true heir to Franco's tradition, which he describes as anti-communism, commitment to the unity of Spain and respect for the country's age-old Christian traditions.

Some commentators suggest that the planned exhumation of Franco's remains could help Vox in next month's election, called after Mr. Sánchez failed to cobble together a government, while also playing dividens for the caretaker primer minister.

"Sánchez's political calculation is that if he can really do this befores November 10, he will be seen as someone who has carried out a historic change that the left has long sought", said Jorge Galindo, a political scientist and columnist.

"It may also be convenient for Sánchez for Vox not to be too weak; fear of Vox helped the Socialists in the April elections and the party wants the right-wing vote to be divided".

But Mr. Galindo added that controversy over Franco would at most curb Vox's decline, as opinion polls suggest the party will struggle to hold on to its April share of the vote. Indeed, while many of the mainly elderly visiting the Valley of the Fallen shared the Franco foundation's anger at Mr. Sánchez's plans, even here there was discord.

"The war dead belong here, but not this man, who put thousands of people here", said Beatriz, who remembered the fear that half a century ago prevented her from talking about politics when she travelled to Madrid.

"His was a dictatorship... let him be with his family instead".